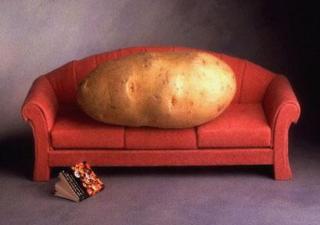 Here are some fun facts and tips on potatoes from Alton during Food Network’s Couch Potato Weekend!

1. High starch potatoes fall apart when cooking which makes them great for baking mashed or just a basic baked potato. Low Starch kinds don’t fall apart when cooking and hold their shape quite well and are perfect for topping salads or making a potato salad. So how do you tell which is which. Science will tell you. If you put a starchy potato in a big pot of water it will sink, on the other hand a less starchy potato will float. So next time you’re unsure, drop you potato in water and you’ll know.

2. We all know that baked potatoes are best cooked directly no the rack in the oven, or at least you know now. So what if you have 12 people coming over for dinner and need to cook a bunch at once, two words, muffin tin. Just don’t poke steam vents in the part of the potato that will be placed in the muffin tin cup, otherwise you’ll end up with soggy bottoms.

3. Need to starch and iron some clothes when you realize you’re fresh out of the can stuff you buy at the store? No problem!  Peel and chop up some potatoes. Then place them in a large container and cover with water, let them soak for one hour. Drain all but the starch that has collected to the bottom of the container. Scoop out a 1/4 of a teaspoon and add to 8 oz. of water in a spray bottle, shake and voila!

4. Ever wonder how Potato Chips came about. A gentleman by the name of Cornelius Vanderbilt was served a plate of fried potatoes that he thought were to thick. He promptly sent them back to the chef and demanded thinner potatoes. The chef who was outraged by this, then made the potatoes so thin that when he fried them, they no longer looked like potatoes.Vanderbilt gives them a whirl, and thus is born the potato chip.

5. Ever made a soup that ends up being to watery? Here’s a trick. Instant Potato Flakes, just a handful will thicken any soup, stew or casserole.

6. When making mashed potatoes it is important to not over work them. For example, many people put their potatoes in a food processor to get them lump free and end up with a messy paste instead. So lesson is be careful when making your mashes.

7. Is a sweet potato actually a potato at all? Short answer is no. Because it’s a member of the Morning Glory family it can’t be a potato and it comes from South American and not Africa like a yam. Does any of this really mean anything? Not really, they’re still delicious!

8. Ever wonder why fast food fries are so skinny? Well, they have to be, because they’re are frozen right after they’re cut, and potatoes that drop below 40 degrees it’s starch converts to sugar very quickly. Because sugar browns faster than starch, if these fries were in fact of the fat variety, they would burn on the outside before they were ever cooked in the middle. So now you know.

9. The average American consumes 142 lbs. of potatoes a year.

10. Where does the term spud come from? A devise that was used for digging up potatoes was actually called a spud. And, farmers known to sell bad potatoes were called spuddy.

You should now have a stock pile of potato knowledge, whether you like it or not. Hey, you never know when that Trivial Pursuit question might come up, and you’ll be ready. Sure, you may get some strange looks with your potato knowledge, but who has the tiny piece of plastic pie slice now?