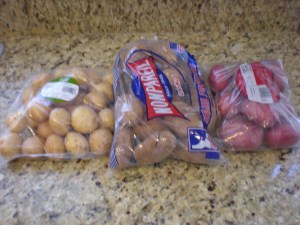 Ahhhh the potato…one of my favorites. We’ve got three recipes in this episode! The Baked Potato, Mashers and Potato/Portobello Gratin. I made these over the course of about a week and it’s amazing we didn’t turn into Potato Heads!
The Baked Potato:
(Printable Recipe)
Ingredients

* 1 large russet potato (If it looks like Mr. Potato Head, you’ve got the right one.)
* Canola oil to coat
* Kosher salt

Heat oven to 350 degrees and position racks in top and bottom thirds. Wash potato (or potatoes) thoroughly with a stiff brush and cold running water. Dry, then using a standard fork poke 8 to 12 deep holes all over the spud so that moisture can escape during cooking. Place in a bowl and coat lightly with oil. Sprinkle with kosher salt and place potato directly on rack in middle of oven. Place a baking sheet on the lower rack to catch any drippings.

Bake 1 hour or until skin feels crisp but flesh beneath feels soft. Serve by creating a dotted line from end to end with your fork, then crack the spud open by squeezing the ends towards one another. It will pop right open. But watch out, there will be some steam.

NOTE: If you’re cooking more than 4 potatoes, you’ll need to extend the cooking time by up to 15 minutes.
Recipe courtesy of FoodNetwork.com 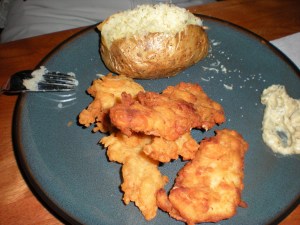 It takes a little bit of time but it is so worth it. I confess, I’m a microwave baked potato girl. I do however once in a while bake it and it really is so much better! Coating the potato in canola oil and sprinkling the kosher salt on gives it this deliciously salty crust on the skin. I do enjoy eating the skin so this was a nice touch. We had it alongside of some beer battered fish and topped them off with butter, sour cream and some kilaree cheddar from below. Another Good Eats!

Combine potatoes in a large pot and just cover with hot tap water. Place over high heat and season water with 1 to 2 teaspoons of salt, (it should taste like sea water). Cover the pot and bring to a boil.

Meanwhile, combine dairy and garlic in a small saucepan and bring to a simmer over medium heat. Keep this mixture barely simmering until the potatoes are done.

As soon as the water comes to a boil, remove the lid and reduce the heat to a simmer. Cook for 15 to 20 minutes or until a potato chunk can easily be crushed with a pair of tongs. Drain, then return potatoes to the pan, return pot to heat and shake for 30 seconds so the surface water can evaporate. Remove pot and set on a towel or hot pads. Pour about half the garlic mixture into the potatoes and mash with an old-fashioned potato masher. Start tasting and looking at the consistency right away. If mashers seem dry or bland, add more of the garlic mixture. Avoid over mashing or you’ll end up with gluey instead of fluffy.

Serve straight or garnish with any of the following: parsley, chopped scallions, crumbled bacon, sun dried tomatoes, (If you have the dry ones, make sure you re-hydrate them.) grated horseradish, horseradish sauce, pesto, more bacon, Sauteed mushrooms…use your imagination.
Recipe courtesy of FoodNetwork.com

I’ve made homemade mashed potatoes many times. I was really curious to see how much better Alton Brown’s recipe could be. I was a little nervous boiling the potatoes in “salt water” but this really made the dish. I used the full 8 garlic cloves because Len and I both love our garlic.

This was the best batch of mashed potatoes I’ve ever made! I put the dairy mixture in 1/3 at a time to get the right consistency. I ended up using the whole mixture. I did a taste test to see what else it needed, and it was amazing just as is…no salt, no pepper, no nothing. We did decide to add a little heat to the dish. Len brought home a habanero pepper, kilaree cheddar and some sour cream to top it off. All I have to say is Yum, Yum Yum!

* 5 or 6 Yukon gold potatoes, peeled
* 2 or 3 Portobello mushroom caps, sliced thin
* 1 cup grated hard cheese such as Parmesan or Asiago
* 3/4 cup half and half
* Kosher salt and ground black pepper

Heat oven to 400 degrees and butter a 9 by 13-inch baking dish and set aside.

Using a mandolin, V-slicer or the slicing attachment on a food processor, slice the potatoes approximately 1/8-inch thick. (If you don’t want to slice all the potatoes at once, slice them one at a time and build the gratin as you go.) Create the first layer by laying the slices in overlapping rows. Once the first layer is down, season lightly with salt and pepper, then scatter with mushroom slices and a couple tablespoons of the cheese. (Don’t over-do it on these layers, if you create a barrier between the adjoining potato layers, the gratin won’t set.) Continue building layers until you’re out of potatoes or out of room to build, but be sure to save 1/2 cup of the cheese for the top.

Pour 2/3 cup of the half and half over the gratin then spread both hands over the surface and push down to work the air out from the layers. Add remaining liquid only if half and half does not come to the surface when you push down. Sprinkle the gratin with cheese, cover loosely with foil and place in middle of oven for 1 hour. Check for doneness by inserting the point of a paring knife straight into the gratin. If it goes through smoothly, remove the foil, return to oven, and turn on the broiler just long enough to turn the top golden-brown. Remove, and allow to sit at room temperature for 15 to 20 minutes before serving.
Recipe Courtesy of FoodNetwork.com

This “Gra-Tan” recipe was really good. It was a combination of simple flavors that worked really well together. I did not have a mandolin so I got to buy one! I think I’m in love. I’ve never sliced potatoes so fast. I only found small Youkons, so I had to use twice as many potatoes but it still worked out really well.

Make sure you go light on the layers as the recipe suggests to ensure that the Gratin sets. I chose to use asiago in this recipe as I like it’s slightly nuttier bite. The browning of the cheese took a little longer than planned, so I may have pulled it out of the oven a little early. The cheese still severed as a crust, just not as golden brown as I like. So don’t be afraid to leave it in a little longer than planned to get it golden brown all the way. Still it was moist and perfectly cooked throughout. I didn’t even get a chance to take a picture of the full after it went so fast 🙂 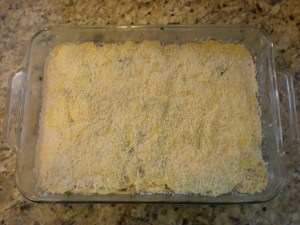 4 thoughts on “This Spud’s For You”